“Replacing Sheryl is a tough challenge because in many ways, she is irreplaceable,” Iliya Rybchin, partner at Elixirr, told TheWrap. “Not simply because she is a remarkable leader, but because the needs of Meta and Mark today are very different from the needs they had nearly 15 years ago when she joined.”

In a way, the company isn’t trying to find the next Sandberg. As Zuckerberg noted this week, incoming COO Javier Olivan, a 14-year veteran who now serves as chief growth officer, will focus on internal operations and become much less public-facing. Instead, the public face of business operations will be Marne Levine, chief business officer reporting to Olivan.

“Javi will become our next chief operating officer since he will now lead our integrated ads and business products in addition to continuing to lead our infrastructure, integrity, analytics, marketing, corporate development and growth teams,” Zuckerberg wrote in his Facebook post. “But this role will be different from what Sheryl has done. It will be a more traditional COO role where Javi will be focused internally and operationally, building on his strong track record of making our execution more efficient and rigorous.”

That’s a departure from the public face Sandberg presented as Facebook’s top deputy, and the first major shift coming at Meta. Next to Zuckerberg, Sandberg often shared the stage — and shared the blame — as the company navigated its many challenges over the years, from the Cambridge Analytica privacy violations scandal to whistleblower Frances Haugen‘s revelations about the company’s awareness about the harmful effects of its platforms. Especially during Facebook’s early days, Sandberg served as a counterbalance to Zuckerberg’s business inexperience (she previously led sales and operations at Google, served as chief of staff for the U.S. Treasury Department under President Bill Clinton and worked for the World Bank).

“She brought rigor and structure to balance Mark’s creativity. She brought gravitas to counter Mark’s occasional recklessness. During her time there, the company evolved, and Mark matured,” Rybchin added. There’s some question of whether Olivan or Levine — or any newbie brought in for a senior role at the company — will be able to stand up to Meta’s headstrong founder-CEO.

The second — and perhaps biggest — challenge on the business front for Meta’s new leaders is protecting its ad business. The company runs a global ad empire, competing with digital-ad giant Google, but lately that revenue has been threatened by Apple’s privacy changes, competition from emerging players like TikTok, as well as macroeconomic factors impacting the tech industry. Apple’s iOS update alone shaved at least $10 billion off the tech giant’s projected sales for 2022, but the financial impact this year is now looking closer to $12.8 billion, or about 9.7% of the company’s total revenue, according to data firm Lotame.

“Sandberg’s successor will be dealing with a behemoth that now has to be optimized for performance without the cover of infinite growth, fixing businesses that are under-monetized such as WhatsApp and Instagram, continuing to scrap with a TikTok juggernaut,” Mike Woosley, COO of Lotame, said, “and finding a way to walk back the company’s perplexing lunge at the nebulous world of virtual reality.”

Zuckerberg has plotted a new course for Meta’s future with an ambitious but unproven plan to build the metaverse, a new cyberworld blending virtual and augmented reality. The company rebranded last year to reflect the centrality of these initiatives — which will cost billions of dollars of investment in coming years without a sure promise of profitability. Last year, Meta’s AR and VR division generated $2 billion in revenue — but losses of $10 billion.

While Zuckerberg assured investors that his metaverse pivot is a near-term gamble that will pay off in the long-term, many are skeptical or confused about whether the metaverse will ever take off. “Pivots are great for early-stage startups, but Facebook’s ‘pivot’ to the metaverse left many in the industry scratching heads and wondering what that means,” Woosley added.

In the next phase, Olivan and his team will also be confronted with greater competition in the overall ad market — not just threats from TikTok and Snap, but from big retailers like Amazon that are becoming savvier. Marketers are bypassing middlemen like Facebook to go directly to consumers and publishers, said Jake Moskowitz, vice president of data strategy at learning platform Emodo.

“The retailers present a better ability to close the loop, and better negotiation leverage with marketers due to the power of shelf space,” Moskowitz said. “Maybe Meta spent the last decade trying to avoid a new platform taking their place, [by] acquiring rising platforms like Instagram and WhatsApp. But now the threat isn’t in category, but rather from either side of their spot in the middle of the value chain.” 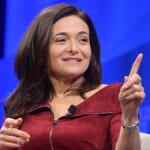 Repairing that other Sandberg legacy

For better or worse, Facebook and the rest of Meta today wouldn’t be where it is without Sandberg. She transformed the platform into a social giant and global advertising leader. Yet she has also been at the center of the many criticisms about Facebook and Instagram — including how they allowed and even helped amplify hate speech, anti-vaccination and other dangerous and harmful content through lax content moderation and unchecked algorithms. Trump supporters used Facebook groups to connect and organize the storming of the U.S. Capitol on Jan. 6, while Instagram has been accused of contributing to teenage depression, mental health and body image issues for girls.

“Sheryl Sandberg knew this was a problem, and — like CEO Mark Zuckerberg — she failed to act,” Angelo Carusone, president of Media Matters for America, said in a statement. “Sandberg leaves Meta, and the social media environment that Facebook helped create, in a far worse place than she found it. Hers is a legacy of enabling trolling, harassment, and abuse.”

It wasn’t always an easy job to be Sandberg, and as Rybchin pointed out, the question now isn’t so much about who replaces her — but whether this is still an attractive job if Meta decides to bring on another COO or expand Olivan’s role in other ways.

“When she joined, the company was on the precipice of exponential growth with every metric pointed up,” he said. “Today the company is at a crossroads with many metrics pointing flat or down. … While it’s still a dream job in many ways, the challenges and potential upside may not make it as personally and financially rewarding as it was for Sheryl.”