HomeVideoElvis Movie Release Date, Cast and Everything We Know So Far With a runtime of 2 hours and 39 minutes, the biopic has received mixed reviews that range from “trainwreck” to “a sharp edit away from being a classic.” According to TIME Magazine’s Stephanie Zacharek, “Luhrmann sees equal value in fact and myth.” The Los Angeles Times’ Justin Chang wrote, “It’s all a bit much, which means it’s just right.”

Audiences will have a chance to find out for themselves later this month, but for now here’s everything we know about “Elvis.”

This is Luhrmann’s first first feature film since 2013’s “The Great Gatsby”:

The film will cover the cultural controversy of Elvis’ stardom

Elvis became an icon throughout the fifties, sixties and seventies, finding his roots in Black gospel church music. While the film focuses on his life, it also acknowledges the cultural context of what was happening around Elvis. When Elvis was a young boy, he became heavily inspired by Black church gospel music. A major controversy of the hip-swayer is whether he amplified Blackness through his performance or appropriated it. The Civil Rights movement unfolds in the background of the film.

Butler gave everything he had to the role

In a recent interview with GQ, Austin Butler detailed his immersive work into the icon that was Elvis. When filming wrapped in 2021, Butler realized just how much a toll the role took on his body. He was rushed to the hospital early the next morning after he woke up in pain, and later he was diagnosed with a virus that simulates appendicitis, spending a week in bed.

Yes, Austin Butler is really singing… for part of the movie

Butler was committed to the musical aspect of “Elvis,” saying, “When I began the process of this, I wanted to get my voice to sound identical to his.” So for Elvis’ early songs, you’ll hear Butler’s voice. But as Elvis gets older and starts recording his more iconic songs, Luhrmann blended Butler’s voice with Presley’s voice, so it becomes a mix of the two.

The biopic will star Austin Butler as The King himself, and Tom Hanks will star alongside Butler as Colonel Tom Parker, Elvis’ manager. Both men really went after their roles, with Hanks looking very different in his prosthetic makeup.

Black musicians like B.B. King (Kevin Harrison Jr.), Little Richard (Alton Mason) and Sister Rosetta Tharpe (Yola), who all influenced Elvis one way or another, will appear in the story. 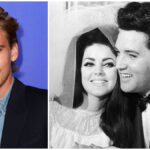 The soundtrack might be even more star-studded than the cast

Doja Cat’s song, “Vegas” now has an accompanying music video, which you can watch here.

Lisa Marie Presley and Priscilla Presley approve of the film

After seeing the film, Priscilla posted her review to Instagram:

“​​I’ve seen Elvis the film, I watched the trailer over a dozen times. But the words I heard from my daughter on how much she loved the film and that Riley will love it too when she sees it brought tears. I relived every moment in this film. It took me a few days to overcome the emotions as it did with Lisa. Beautifully done Baz, Tom, Austin and Olivia.” 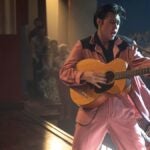 Lisa Marie Presley tweeted her praise of the portrayal of her father:

“Baz, your utter genius combined with your love and respect for my father and this project is just so beautiful and so inspiring. I know I’m being repetitive, but I don’t care, Thank you for setting the record straight in such a deeply profound and artistic way.