HomeEntertaintmentBill Walker, Nashville Force as Conductor and Arranger, Dies at 95

Bill Walker, Nashville Force as Conductor and Arranger, Dies at 95 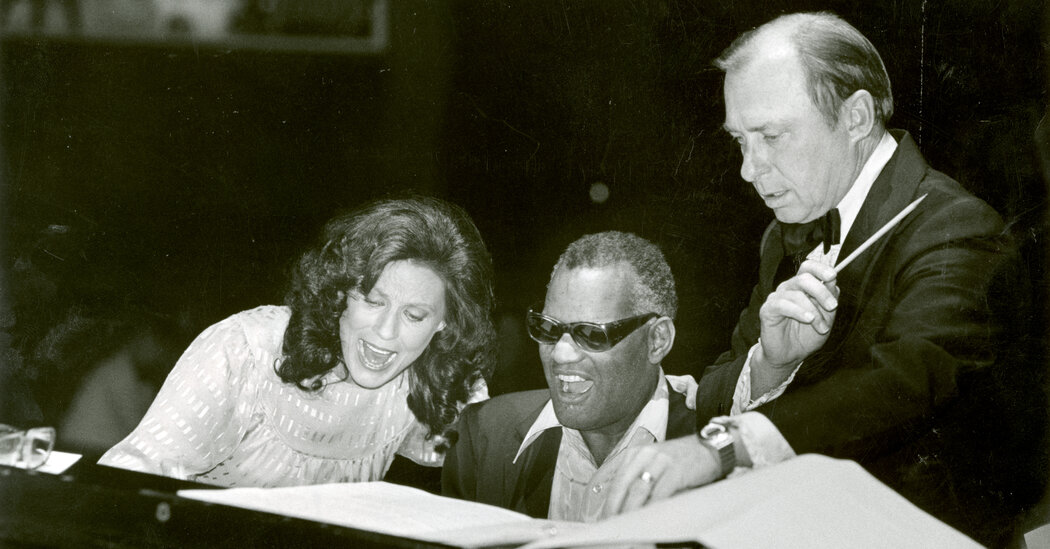 NASHVILLE — Bill Walker, a conductor and arranger who became a musical force in Nashville, scoring popular recordings for country stars like Marty Robbins and Connie Smith and serving as musical director for Johnny Cash’s primetime television variety show, died on May 26 at a rehabilitation facility near here. He was 95.

His death was confirmed by his daughter-in-law Terri Walker, who said he had developed pneumonia after recent knee replacement surgery.

A classically trained pianist, Mr. Walker orchestrated blockbuster hits like Eddy Arnold’s “Make the World Go Away” (1965) and Sammi Smith’s “Help Me Make It Through the Night” (1970). Both records reached No. 1 on the country chart and crossed over to the pop Top 10.

He also served as arranger and conductor for, among many other recordings, Donna Fargo’s “The Happiest Girl in the Whole U.S.A.,” a chart-topping country single that stalled just outside the pop Top 10 in 1972.

In the process he had a hand in shaping both the lush, sophisticated Nashville Sound of the 1960s and the soulful “countrypolitan” sensibility that came after it.

Empathy and elegance were his calling cards, along with a knack for plumbing the emotional heart of a song, a gift that was nowhere more evident than in his work on “Help Me Make It Through the Night.”

“Take the ribbon from my hair,” Ms. Smith implores her lover as Mr. Walker’s gossamer arrangement caresses the ache in her voice.

His sympathetic strings likewise lent pathos to George Jones’s lovelorn “He Stopped Loving Her Today,” a No. 1 country hit in 1980.

“You are there to make the artist sound good, not to show how clever you can be,” Mr. Walker said of his philosophy of recording in a 2015 interview at the Country Music Hall of Fame in Nashville.

“That’s how I used to do it,” he continued. “It didn’t matter if the artist was a hillbilly singer from back in the woods somewhere or Perry Como. You give them the same attention no matter what.”

William Alfred Walker was born on April 28, 1927, in Sydney, Australia, the eldest of three children of Alfred and Beryl (Gabb) Walker. His father was a dairy farmer, his mother a homemaker.

William began playing the piano at age 5 and soon started taking private lessons. While in high school and college he performed in clubs and taught himself the rudiments of arranging by listening to popular recordings on the radio. He received his formal training at Sydney University’s Conservatorium of Music, graduating in 1955.

In 1957 he moved to South Africa to become the musical director of the Johannesburg division of RCA Records, where he released 23 largely instrumental albums of pop and Latin music that featured him on piano backed by large and small ensembles.

He also produced sessions for the country superstar Jim Reeves, who encouraged him to move to Nashville; Mr. Walker arrived the weekend Mr. Reeves died at 39 in a fatal plane crash, in July 1964.

He started working with Mr. Arnold and helped revive the singer’s career at a time when ballad singers were being eclipsed on the country chart by artists like Buck Owens and Roger Miller, who were more attuned to up-tempo rock ’n’ roll.

Mr. Walker later turned down a chance to succeed Chet Atkins as head of the Nashville office of RCA before becoming the musical director of “The Johnny Cash Show” on ABC-TV in 1969. There, he helped bring Southern culture to living rooms and dens across the country by collaborating with Mahalia Jackson, Roy Acuff, Louis Armstrong and an array of other guests.

He also wrote and conducted the arrangement for Mr. Cash’s “Sunday Morning Coming Down,” a live recording from the show that went to No. 1 on the country chart in 1970. Mr. Cash typically signed off each episode of his program with the salutation, “Goodnight, Mr. Walker!”

After The Johnny Cash Show ended its run in 1971, Mr. Walker spent the next two decades working as an independent producer for singers like Ferlin Husky and Wanda Jackson and managing his own label, Con Brio Records. In the early ’70s he worked with Ray Charles and Loretta Lynn for an NBC television special.

From 1991 to 1998 he was the musical director for “The Statler Brothers Show,” a popular musical variety show on the Nashville Network. He remained active as a producer and arranger into the 2000s, writing scores for TV specials and movies at a time when session musicians relied primarily on improvised, or “head,” arrangements.

Mr. Walker is survived by his wife of 51 years, Jeanine (Ogletree) Walker, a former Nashville session singer; a daughter, Beth Walker; a son, Colin, from a previous marriage; his sister, Julianne Smith; his brother, Robert; and 13 grandchildren and 21 great-grandchildren. Two sons, Jeff and Peter, and a daughter, Lisa Gibson, all from previous marriages, died.

Mr. Walker worked with ensembles on at least four continents, including studio professionals on the East and West Coasts of the United States. For the arrangements that he composed, though, he preferred the intuitive, less-is-more approach of the session musicians he first encountered in Nashville in the 1960s.

“That’s the thing with Nashville players,” he said in his interview at the Country Music Hall of Fame. “They all listen to each other and they join in the licks. It’s the stuff you can’t write. You can only give them the idea and let them go with it.”

Kevin Hart's Been Filming His New Netflix Movie In Italy, And I'm So Obsessed With All The Views