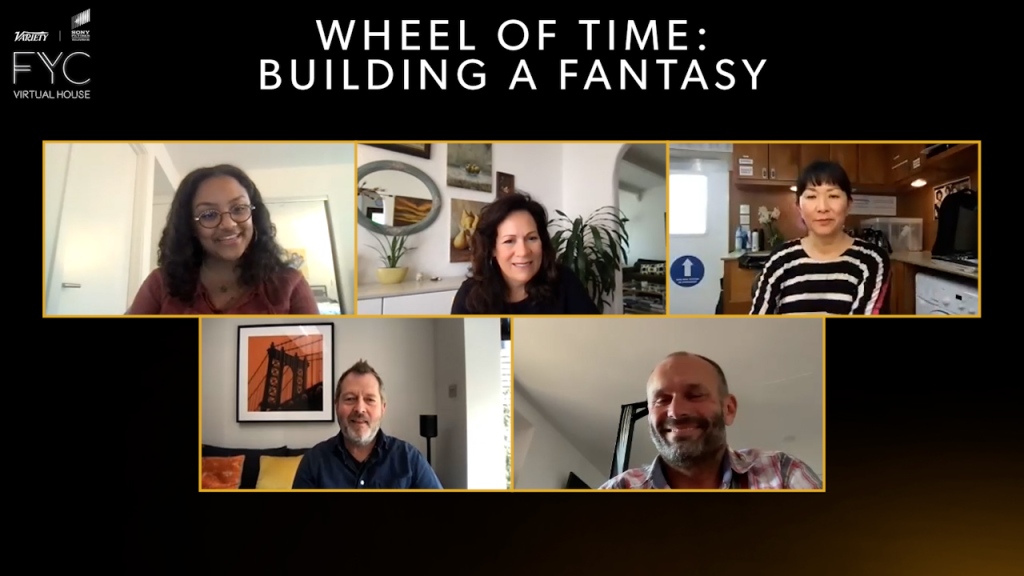 Much of the richness of Robert Jordan’s bestselling book series “The Wheel of Time” came from the various cultures he drew from in his worldbuilding. So when it came time to visualize that world in Amazon Prime Video’s adaptation of the books, the craftspeople behind the scenes looked globally for inspiration.

In a conversation for the Variety and Sony Pictures TV Virtual FYC House moderated by reporter Selome Hailu, hair and makeup designer Denise Kum explained how collaborating with a research consultant informed her work on the show.

“Whether it’s the villagers, the Tinkers or, towards the end of Season 1, the Shienarans and the Seanchan, everyone has a historical precedent of what their culture means to them,” Kum said. “Robert Jordan has a very dense text and he gets obsessed by details of places. We were very lucky that we had Sarah Nakamura, our researcher who knows the books inside and out and had read them — I don’t know how many times, maybe 37 at the last time I spoke with her. Everything had to have a meaning and a ritual and a sense of place, from the way they braided their hair to the way something would be tied in a particular knot.”

Kum also said that she sought out references for colors and textures by looking to the work of costume designer Isis Mussenden, who explained how she balanced an international perspective with the actors’ physical needs.

“With Moiraine [played by Rosamund Pike], it was all based in her culture. The Aes Sedai [women in a magical society] come from different places,” said Mussenden. “She’s from Cairhien. Cairhien is a mixture of high-end French and low-end Chinese [styles of dress]. We started to build a fantasy costume around that, but it also had to be practical for her to be on the horse and do her stunts and be traveling for 20 years.”

Those stunts were coordinated by Jan Petrina. One of his most impressive feats on “The Wheel of Time” was to coach Madeleine Madden, who played Egwene Al’Vere and insisted on doing her own stunts — including a scene where she falls off a cliff. This was especially challenging due to the scene being shot on location in Slovenia.

“If you’re in the studio, you can put a lot of mats under for safety. But there, in the floating river, you don’t have the option,” Petrina said. “And the river wasn’t too deep, so we did have to use wires and just put them above Maddy and throw her in. She would just touch a little bit of the water each time. And we would reset a lot, because our director loved doing a lot of takes. So we had to be ready for Isis making a hundred costumes for each time she would have to be pushed. We had to keep her dry as much as we could. She did an amazing job, and it gives the audience a little bit more when you see the actors really falling off the cliff and hitting the water.”

The stunts were also made more convincing thanks to the visual effects supervised by Julian Parry, whose work was largely defined by the pandemic hitting in the middle of production.

“Up until that point, the show had been shooting in these spectacular locations with amazing vistas. And then COVID hit us, and how do we keep the vista without having to [use] green screen?” Parry said. “That’s when visual effects did a little bit of trickery as we normally do. We ended up locally in a sandpit — a very nice sandpit, but it wasn’t the sort of landscape that we wanted, which was originally going to be [the Canary Islands]. So what we managed to do was bring the Canaries to us, and film everybody in a very non-VFX way in the sandpit, and then drop everybody else into the world afterwards.”

Watch the full conversation above.