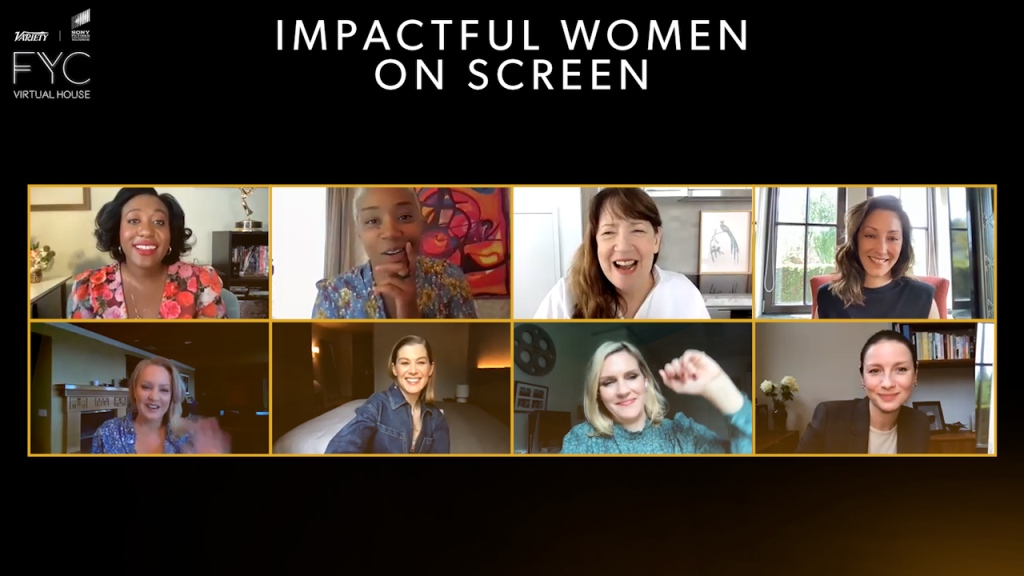 Sony Picture Television’s programming runs the gamut from laugh-out-loud comedy to dark drama, with fantasy and live productions in between. But what stands out most is the bench of funny, dramatic, messy and complex women at the center of these stories — played by an impressive list of talents, including Caitríona Balfe (“Outlander”), Christina Chang (“The Good Doctor”), Ann Dowd (“Live in Front of a Studio Audience”), Tiffany Haddish (“The Afterparty”), Wendi McLendon-Covey (“The Goldbergs”), Rosamund Pike (“The Wheel of Time”) and Rhea Seehorn (“Better Call Saul”).

“You know what I love about women getting the roles, the work, the writing, the directing?” asked Dowd amid the conversation, which saluted “Impactful Women on Screen.” “We were born for it. Let’s just get real. It’s not like ‘Oh, how do we do it?’ It’s just in us. Aways has been; always will be.”

The panel was presented as part of Variety and Sony Picture Television’s Virtual FYC House, moderated by Variety senior entertainment writer Angelique Jackson, as the actors unpacked their method of playing this impactful women in all their varied forms. And as much as the roles have made an impression on audiences, they’ve also had a great impact on the women who’ve played these characters.

Christina Chang has played Dr. Audrey Lim, chief of surgery on “The Good Doctor,” for five seasons and some of the doctor’s personality has worn off on her. Chang explained that because “[Lim] doesn’t feel the need to smile after an argument, I think I’m better at being that way now, too. She’s just so much more unapologetic.”

Chang continued, “I’m pretty honored to be able to play a female surgeon who’s a chief surgeon as well since, such a small percentage of women globally and in North America are in that position, so it’s great to be able to represent.”

Dowd starred as Mrs. Garrett in the recreations of “Good Times” and “Diff’rent Strokes” for the latest edition of “Live in Front of a Studio Audience,” embodying a role played to perfection by the late Charlotte Rae. Dowd’s greatest pride in her performance comes simply from “getting through it.”

“I don’t know when I’ve ever been more terrified in my life,” she admitted. “So my task was simply to send my prayers to Charlotte, ‘Honey, can you let me in here and tell me what to do?’ and she was pretty generous. … It was an extraordinary experience, but I’m very grateful that the character had been established so I just had to follow the rules, and that was terrific.”

Haddish played Detective Danner in the Apple TV+ freshman comedy “The Afterparty,” who is tasked with getting to the bottom of the show’s central mystery when a high school reunion afterparty turns deadly.

Of playing the character, Haddish teased, “If I ever had to be investigated, I would want to be investigated by Detective Danner. I would want that type of detective to be questioning me, probing me for information. I would probably divulge it all. I’m really easy like that, anyways. But that kindness, yet harshness, yet welcoming-ness, I love it. I love that about her.”

It’s the type of three-dimensional role, Haddish explained, that gives her an opportunity to show different aspects of herself, while putting the spotlight on women detectives.

“They’re regular people just like me and you. They just want to get down to the truth,” she explained. “God sent me here to live my truth and to show other people’s truths … and bring joy in the process.”

In addition to exploring the depth of their characters on screen, McClendon-Covey, Balfe and Pike have also taken on producing roles behind the scenes.

“I’d never played anyone this long before, so having had the opportunity to live with a character for this long and to be able to take her in all these different directions — she’s been so-called strong, she’s fallen apart, we’ve been able to deconstruct her, we’ve been able to build her back up again,” Balfe says of playing Claire. “She has aged almost 30 years in the time I’ve been playing her. The amazing gift that this character has given me, is just the breadth and the variety of what I’ve been able to play with her.”

And as “Outlander” rolls ahead to its 7th season, Balfe reflected on her role as a producer, saying that it’s been a really “collaborative experience” since she and her co-star Sam Heughan were elevated to the post.

“One of the most important things is having the seat at the table when scripts are being developed earlier on. I’ve just loved this process, being able to sit with the writers and talk about your character,” Balfe observed, sharing an anecdote about how she helped shape the story about Claire’s struggles with PTSD in Season 6.

“I worked super close with the writers very early on about just finding the right way to express her innermost thoughts, and it was so funny because the writer had this whole other idea of what Claire’s deepest, darkest fears were,” she recalled. “And I was like, ‘But that’s not what she thinks about herself.’ It’s been such a great thing that we’ve had that sort of access and being able to put that input in as well.”

For Pike, producing Amazon Prime Video’s “The Wheel of Time” has afforded her the opportunity to support her co-stars.

“We’ve got a really young cast, and I think it’s really nice for them to feel that there’s a voice on the producing side who gets where they’re coming from,” Pike shared. “I remember being 22 on a set and everybody thinking that I was very put together and seemed very confident, and I wasn’t at all. … so I make a point of checking in, finding them, and finding out what’s worrying them.”

The role itself also presented a groundbreaking new take on the fantasy genre.

“Traditionally, fantasy found an audience with men and centered on male characters, and then Robert Jordan, in the ’90s, wrote this series, ‘The Wheel of Time,’ and put powerful women at the center of his world,” she explained.

That perspective drew Pike, who admittedly wasn’t particularly interested in fantasy, to accept the role of Moiraine Damorand, the leader of the magical all-female organization called the Aes Sedai. “I read the script, and I thought, ‘Alright, this is Gandalf, but she’s a woman.’ Which is appealing.”

McClendon-Covey is also an executive producer on “The Goldbergs,” in addition to her own first-look deal with Sony Pictures Television. With the show in its 10th season, the comedy has the distinction of being the longest-running live-action network comedy currently on the air, but she’s more focused on maintaining about a different reputation.

“I like to make sure that when people come to the set, it’s the best set they’ve ever been on,” McClendon-Covey said, sharing her main goal as a producer.

“I know how awful it is to be the new person on set. When you’re an actor, you have your first day of school over and over and over again,” she explained. “I never want anyone to come to the set and feel terrified all day. I want them to feel welcome, I want them to feel part of the family. .. When I hear people say that they’ve had a good time and that we have one of the happiest sets in television… That’s just something I made up. That’s the rumor I like to spread. But no, it’s one of the biggest compliments that you can hear.”

After wowing critics and audiences for five seasons starring as Kim Wexler, Seehorn became the first “Better Call Saul” star to direct an episode of the critically acclaimed drama.

“It was incredible when I wasn’t pooping my pants. Basically, it was super, super scary and then awesome in between,” Seehorn said of making her directorial debut with the episode.

“Our show deals in a lot of subtexts and a lot of what’s not said, that is always thrilling for me to play. … a character that is hard to pin down, often inscrutable,” she explained. “My showrunners released me from likable in my first season. They said, ‘Don’t ever worry about it. Don’t ever smile at the end of some argument just to make sure everyone’s comfortable. Not your problem.’ And I felt that way when I was directing as well. I was supported, respected and given every tool you could possibly want as a guest director. I mean, I had 300 people that they weren’t going to let me fail, no matter what, and that’s an amazing thing to feel.”

Reflecting on her journey with the series, which wraps up later this year after six seasons, Seehorn noted, “If I didn’t have the incredible fortune to get to play Kim Wexler, I’d still be thrilled this character exists on television.”

“Not being ancillary to a male story, and making the choices that are coming from her, has been an incredible journey to go on,” she added. “It should not be rare on television. All the women on here get to do it, but it should be a little more common.”

Watch the full conversation in the video above.