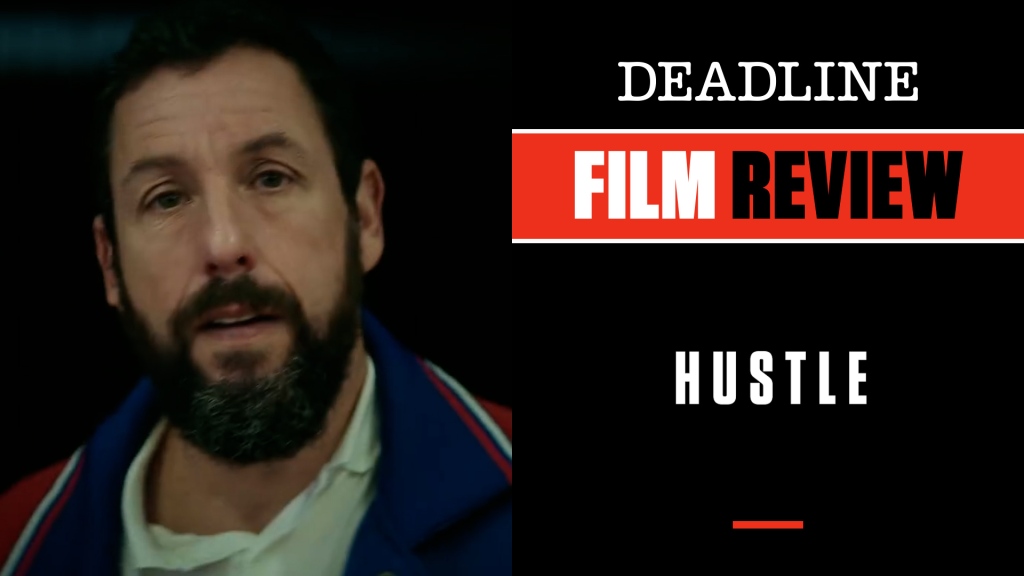 It is no secret that Adam Sandler has real chops as an actor. Don’t let his legion of broad comedy movies fool you. We saw it, as did Paul Thomas Anderson, in Punch Drunk Love. We saw it, as the Safdie Brothers did, in Uncut Gems, for which his universally praised performance was robbed at Oscar nomination time.

And now we see it again in Hustle, in which he plays a three-decade veteran basketball talent scout aiming to get off the road and finally land his dream job as a coach for the Philadelphia 76ers. Sandler is a hoops fan, and maybe that helps, but he really finds his mojo as Stanley Sugarman, a guy looking to move up but never quite catching the break because, as his current team owner tells him, “You are just too invaluable as a scout.”

In terms of sports movies, this one fits nicely as a cross between Jerry Maguire and Moneyball but one that marches to its own beat. On the one hand, it has some echoes of Maguire as a compelling story of the relationship between the starmaker (Stanley) and his once-in-a-lifetime discovery, a 22-year-old Spanish construction worker named Bo Cruz (Utah Jazz player Juancho Hernangomez) he finds on a scouting trip to Mallorca and is determined to turn into a superstar on the court. On the other hand, like Aaron Sorkin’s brilliant Moneyball, this film has a very smart take on the business and mechanics of the game and just what it takes to groom talent, taking us deep into front offices with an all-knowing command of how the sausage is made.

The screenplay comes from Will Fetters (an Oscar nominee for A Star Is Born)and Taylor Materne, and it clearly knows the territory. The fact that LeBron James is one of the producers here with his production company Springhill also gives you a clue there is a real attempt at authenticity, as does the nearly 75 cameos from legends, current players and others connected deeply in the world of hoops dreams and drama.

Plot-wise it revolves around Sugarman, who has a unique relationship with the older owner of the team (Robert Duvall) who encourages him to “never give up” and actually makes his dream possible by giving him the assistant coach job he has always strived for. This also means getting to stay home with his wife (nicely played by Queen Latifah) and daughter (a charming Jordan Hull) instead of living out of a suitcase 24/7. Unfortunately, when the owner dies, his kids inherit the franchise. Daughter Kate (SNL‘s Heidi Gardner) wants to do other things and cedes the day-to-day to her more opinionated brother (Ben Foster), whose first order of business is to get Stanley back on the scouting roster where he believes he is a more important player. But after some pushback, he agrees that if Stanley can find him the next bona fide superstar, he will then, and only then, let him join the coaching roster.

When he actually discovers Bo, all bets are off as complications arise including an unknown record of assault and a not-so-hot initial audition for the team. But Stanley is convinced this guy has what it takes, and he does everything to get him the chance he thinks he deserves and, if successful, a new lease on a career he feels he was made for. But it isn’t easy, and when opposing player Kermit Wilts (Minnesota Timberwolves player Anthony Edwards) taunts him on the court with disparaging remarks about his daughter and mother, Bo’s past comes back to haunt him.

There are no easy answers here, no clichéd tropes so often found in sports movies, just an honest look at the ups and downs for a guy who is a true natural but can’t catch the big wave. Director Jeremiah Zagar — with the help of exceptional editing from Tom Costain and Brian M Robinson and cinematography from Zak Mulligan, not to mention the soundtrack — really delivers behind the camera to get the essence of what goes on in the big leagues of the NBA. It’s all through the eyes and heart of Stanley Sugarman, a role Adam Sandler clearly was born to play. Nearly six months into 2022 it stands as one of the year’s finest performances.

The 6-foot-9 Hernangomez acquits himself beautifully as the would-be star, a real find as his career to now has been playing for a number of teams. In fact this film is full of all kinds of players, new and old, as well as actual players taking on fictional roles and socking it home, notably Kenny Smith as agent Leon Rich. It is always nice to see Duvall turn up and give any film he is in real gravitas, if only for a couple of scenes. Gardner is excellent as well, and Foster knows exactly how to play the spoiled son who thinks he knows what he is doing once in the driver’s seat but really has no idea how to lead.

Producers are Sandler, James, Allen Covert, Joe Roth, Jeffrey Kirschenbaum, Zack Roth and Maverick Carter. Netflix opens it Friday in a limited theatrical run of 400-plus screens and begins streaming it June 8. Check out my video review with scenes from the film at the link above.

Do you plan to see Hustle? Let us know what you think.